Speeches, books and television await. So do more opportunities to receive taxpayer funds Donald Trump viewed his 2016 presidential run as something of a marketing tool for his business. “You know, in a certain way, that’s brand value,” the Republican frontrunner said in September 2015, reflecting on his early lead in the polls. “I don’t talk about it.”

Except, of course, he did talk about it. Not just with Forbes but with his team, including former attorney Michael Cohen. “Mr. Trump would often say this campaign was going to be the greatest infomercial in political history,” Cohen later testified before Congress. “He never expected to win the primary. He never expected to win the general election. The campaign for him was always a marketing opportunity.”

Politics indeed proved to be a marketing opportunity for Trump—just not a profitable one. By running, Trump basically guaranteed that he wouldn’t continue earning money from The Apprentice, which aired from 2004 to 2015 and provided Trump with what he said was $214 million. In the early days of the 2016 campaign, Trump’s product licensing partners distanced themselves after he made controversial comments about Mexican immigrants. Shortly before taking office, Trump abandoned dozens of potential deals. Once he was in the White House, profits plunged at properties, such as the Trump National Doral golf resort in Miami. He is now worth an estimated $2.5 billion, $1 billion less than he was on Inauguration Day.

All of which puts the president in an interesting situation. Yes, he has lost the election, according to every leading news outlet, which means he’ll soon lose other presidential perks, like wielding power over lenders and receiving protection from federal prosecutors. But he will gain something, too—the opportunity, over the next few years, to earn millions more. Not a bad consolation prize.

Bill Clinton demonstrated one way to cash in after leaving office. When the 42nd president left the White House in 2001, he was basically broke, owing millions in legal fees. Clinton quickly found a way to make money by giving paid speeches, starting with a $125,000 one to Morgan Stanley on February 5, 2001, just 16 days after he left office. By the end of 2015, Clinton had earned an estimated $106 million from speaking. Trump can clearly attract large crowds. Why not charge them money?

Then there are books. Clinton earned an estimated $38 million as an author from 2001 to 2015, penning books including the memoir My Life. America’s current tweeter-in-chief isn’t known for his literary prowess, but he has actually released more than a dozen books, making him one of America’s most-published billionaires. Given all that he has seen in office, Trump should have plenty of fresh material.

On television, Trump seems to have virtually endless possibilities. He could theoretically go back to reality TV. Maybe there would be an opportunity to pick political apprentices? Or he could presumably host a news show. Trump is almost certain to make his opinions heard—why not get paid for doing so? There are even some rumors that the president’s family has considered buying or creating its own station.

Trump knows as well as anyone that success on television can lead to other opportunities. Perhaps some product-licensing partners would be interested in renting his name once again. Foreign business leaders have already indicated that they would be eager to strike new deals. “The tower will be ready for the Trump mark,” one of the president’s former business partners in the ex-Soviet republic of Georgia told Forbes in 2017, “if the Trump mark is ready to come back to the tower.”

Such opportunities would have been waiting for Trump regardless of when his presidency ended. But as any investor will tell you, money tomorrow is worth more than the same amount of money four years down the road. Especially for a 74-year-old who doesn’t have forever to enjoy his fortune.

Trump, unlike Clinton, will leave the Oval Office as the owner of a business worth billions. But the presidency has damaged his brand. For a dose of optimism, Trump might consider another former president, George W. Bush. When Bush left the White House in 2009, his approval rating was just 34%, 12 points worse than where Trump currently stands, according to Gallup. Nine years later, in 2018, a CNN poll showed 61% of Americans thought favorably of Bush. Over a shorter timeframe, Barack Obama’s favorability jumped from 59% the day he left office to 66% in 2018.

Senator Kamala Harris (D-CA) made history on Saturday, November 7, when she... →

Losing the election may also help Trump’s New York City condo portfolio. In a building on the corner of 59th Street and Park Avenue, where the president owns an estimated 17 apartments worth $100 million altogether, values fell roughly 32% from 2015 to 2019. The sale prices of other Manhattan luxury apartments, meanwhile, increased 15% during that period. It’s not hard to discern why: The president, who pulled in just 14% of the votes in Manhattan this election, is widely hated in his hometown. If the disdain subsides over the years and Trump adds, say, 10% of the value in his Park Avenue property, that would boost his net worth by an estimated $10 million.

The presidency has provided Trump with an opportunity to benefit from taxpayer funds. That will not necessarily go away when he leaves office. In his first five months as president, Trump visited his properties enough that the Secret Service spent $254,000 at his businesses, according to documents obtained by a nonprofit group called Property of the People. It’s not clear exactly how much government money has flowed into the Trump empire since then. The Secret Service, which also protects former presidents, should continue to frequent Trump’s businesses after he leaves the White House, especially since he declared his Mar-a-Lago club as his official residence. If the Secret Service spends at one-fourth of the rate it did in the beginning months of Trump’s presidency—and the president lives to be 93 years old, like his father did—the agency could end up paying his properties another $2.9 million.

Trump’s 2016 victory wasn’t all bad for his business, which means a 2020 defeat won’t be all good either. For starters, losing will open the possibility that federal prosecutors could indict Trump, who has been protected by a legal opinion that suggests sitting presidents cannot be prosecuted for federal crimes. The president will also have to contend with Manhattan’s district attorney and New York state’s attorney general, who have both been looking into Trump’s finances.

Aside from legal matters, there are some properties that could suffer from an early exit. Trump-owned condos have been selling at a premium in Nevada, where the president is more popular than he is in his New York. Who knows whether that will continue once Trump is out of office? He will also presumably lose customers at the D.C. hotel, including some lobbyists and foreign officials seeking influence.

Much of the pressure facing Trump’s business has to do with debt. At his D.C. hotel, the president secured a $170 million mortgage from Deutsche Bank. That loan comes due in 2024. It’s just one chunk of the more-than $1 billion leaning against the president’s portfolio. Trump’s lenders will expect his businesses to pay back an estimated $900 million from 2021 to 2024.

Coming up with that amount of cash will likely require some combination of selling assets and refinancing them. A natural lending partner would be Deutsche Bank, which currently serves as the president’s creditor on roughly $340 million worth of debt. But shortly before the election, a report emerged that the German bank was hoping to sever ties with Trump, something its executives believed would be easier to do if he were no longer president. Fortunately for Trump, he might have less trouble finding other lenders next year, once he is free from the swarm of ethics concerns that comes with carrying a multibillion-dollar business into the White House. 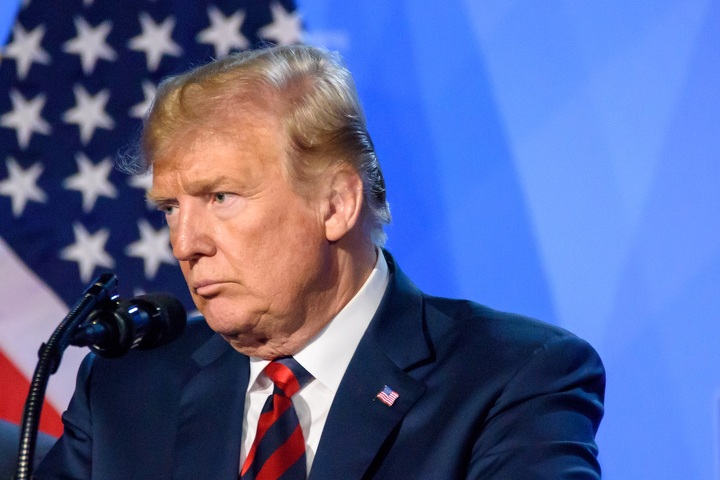