The Biden campaign released a statement calling Trump “too weak, too scared,” to “repudiate one of his supporters After asserting that former Vice President Joe Biden failed to adequately denounce protest violence, President Donald Trump on Monday defended the violent actions of a caravan of his supporters in Portland, Ore., as well as those of Kyle Rittenhouse, a 17-year-old accused of murdering two protesters in Kenosha, Wisconsin.

Since violent clashes between Black Lives Matter protesters and counter-protesters in Kenosha and Portland led to three deaths last week, the Biden and Trump campaigns have repeatedly called on each other to denounce protest violence while accusing each other of supporting it.

Biden offered a stern condemnation of protest violence in his speech, declaring “rioting is not protesting” after “unequivocally” denouncing violence on the left and right and calling on Trump to do the same in a statement on Sunday.

Biden’s remarks were met with immediate dissatisfaction from the Trump team, with Trump campaign advisor Jason Miller hitting Biden for not specifically mentioning “radical left-wing groups like Antifa” in his blanket denunciation.

That sentiment was echoed by Trump, who spent much of his White House briefing taking shots at Democrats, claiming Biden “didn’t mention the far-left” and accusing him of “repeating the monstrous lie that these are peaceful protests."

“He mentioned law enforcement, but he didn’t mention Antifa, I wonder why,” Trump added, claiming Biden would give the decentralized anarchist group “the far-left policy agenda it’s asking for.”

But given the opportunity to denounce a caravan of his supporters in Portland, who were caught on video Saturday shooting protesters with paintballs or tear gas, Trump called it “a peaceful protest” and declared “paint is not bullets.”

Asked about Rittenhouse, Trump called it “an interesting situation,” and claimed Rittenhouse was “trying to get away” from protesters who “violently attacked him,” asserting, without evidence, that Rittenhouse “probably would've been killed."

“You know me. You know my heart, and you know my story, my family’s story. Ask yourself: Do I look to you like a radical socialist with a soft spot for rioters? Really?” Biden asked during his speech, in contrast with Trump’s claim that he would “surrender to the left wing mob.” Biden also contradicted Trump’s multiple assertions that he is anti-police, telling Pittsburgh CBS affiliate KDKA, “every cop when he puts on that badge has the right to be able to come home at night and to be safe."

The Biden campaign released a statement calling Trump “too weak, too scared,” to “repudiate one of his supporters.” In the statement, Biden urged Trump to “join me in saying that while peaceful protest is a right — a necessity — violence is wrong, period. No matter who does it, no matter what political affiliation they have. Period,” and said that, if he can’t, he is “unfit to be President.”

Trump is slated to travel to Kenosha on Tuesday to survey the damage from the protests, despite Wisconsin Gov. Tony Evers urging him not to. “Kenosha is something we did a good job on,” Trump said, citing the national guard intervention. "Should be very interesting," Trump said of the visit, predicting "It could increase enthusiasm, it could increase love and respect for our country,” after he was asked about concerns it could increase violence. 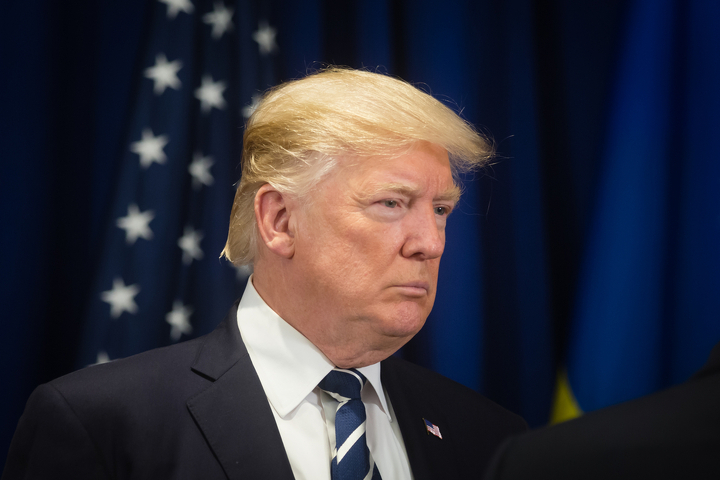