With the end of the space shuttle program and the planned decommissioning of the International Space Station on the horizon, NASA is strongly debating what its next steps for human spaceflight will be Фото: NASA / flickr
The Orion capsule would be one of many components on a proposed space station that.

The Obama-era plans of asteroid redirection and capture appear to be disfavored, paving the way for a bold new direction. While many are looking to Mars with great hope, some are calling to return to the Moon first. But the proposal the administration recently put forth advocates for none of them, instead choosing to pursue a crewed lunar orbiter, claiming that it paves the way for future exploration missions. Yet the evidence points to a far different conclusion: spending our resources here would squander our resources and accomplish very little from both scientific and technological perspectives.

Two Myths About Strategy - And Two Tools To Make Yours Work

We all know that setting a strategy matters. It’s one of the first steps to... →

NASA is the world's leading space agency, and has been the undisputed leader in space exploration for nearly five decades. It makes up nearly half of the world's budget for scientific endeavors in spaceflight and space science, and has four primary goals: human exploration, aeronautics, space technology, and science. Despite tremendous accomplishments in the latter three areas, including rovers on Mars, the Hubble Space Telescope, heliophysics, Earth monitoring, advanced aircraft, 3D printing, nanotechnology and much more, NASA has always been best known for human spaceflight. Ever since the Apollo moon landings, NASA has been humanity's best hope for journeying to other worlds.

The post-Apollo era has been filled with interesting programs and collaborations, many of which have resulted in tremendous scientific knowledge. The space shuttle program brought us spacelab missions, construction of the International Space Station, servicing missions to satellites and observatories, crewed mission in low-Earth orbit, and carrying missions that would go onto interplanetary journeys, such as Galileo, Ulysses, and Magellan. The ISS has gone a step further, enabling us to conduct long-term experiments on the effects of microgravity on the human body and other biological organisms.

Our dominance of low-Earth orbit has led to an unprecedented understanding of our world, the processes driving it, and how our environment and our biological functioning are intertwined. But our goal was never to be content with incremental advances or the development of a few new materials and technologies; the goal of space exploration is to explore what's out there. While robotic missions, landers, rovers and orbiters have done a tremendous job, they lack the one ingredient necessary to solve problems and make brilliant, on-the-fly decisions: a human brain. Artificial intelligence may someday overcome that tremendous hurdle, but that day has not yet arrived.

Why Scientists Are Marching

On April 22, scientists from around the world marked Earth Day by participa... →

So what's the next step? Many have advocated for Mars as the next logical step, while others have proposed sending humans on asteroid retrieval missions or back to the Moon. But at the recent 33rd Space Symposium in Colorado Springs, NASA instead revealed a shocking proposal, to build a lunar space station orbiting the Moon. This proposal has some major benefits from a political and industry perspective:

Yes, it's true that the International Space Station will reach the end of its useful life in the 2020s, and that if we don't come up with a new program to either extend it or replace it, we'll lose a sustained human presence in space. The propsed lunar space orbiter would operate in an extremely elliptical orbit, coming within 1,500 kilometers of the lunar surface at its closest and extending for up to 70,000 kilometers at its farthest. It will break the record — currently held by Apollo 13 — for the greatest distance a crewed mission has ever achieved from Earth.

It's a great way to spend a great deal of money, advancing science and humanity in no appreciable way. Instead, why not learn the lessons from humanity's greatest successes? Don't look at the technology you've already developed and ask, "what can we do with it?" Look at the goal you want to achieve and ask, "what will it take to accomplish this?"

If we want to put a human colony on the Moon, we can do it. There are plenty of suitable locations near the North and South poles of the Moon that are both in permanent sunlight and have access (within craters) to water-ice and shadowed regions. There's material that can shield you from radiation. And that's where the raw materials for propellant and the interesting science all resides. If the goal were humans on Mars, it has the disadvantage of being more remote, more difficult to reach and resupply, and a much longer time delay (7-to-20 minutes, depending on the orbits) than the 1-to-2 seconds separating the Earth and the Moon. But Mars also has an atmosphere, more access to water, larger gravity, and an Earth-like day-and-night.

Our technology isn't ideally suited to either one of those missions as compared to a crewed lunar orbiter, and that's kind of the point. As Robert Zubrin explains, the great advances we've made have all come from us attempting to accomplish something big, bold, and daring. If the entirety of NASA's budget -- approximately $20 billion per year, or 0.11% of our GDP -- were devoted to one of these big endeavors, we could accomplish it in the next ten years. The situation is no different from what it was in 1961, except our technology is far more advanced today than it was more than half a century ago. As our president at the time said, There is no strife, no prejudice, no national conflict in outer space as yet. Its hazards are hostile to us all. Its conquest deserves the best of all mankind, and its opportunity for peaceful cooperation many never come again. But why, some say, the moon? Why choose this as our goal? And they may well ask why climb the highest mountain? Why, 35 years ago, fly the Atlantic? Why does Rice play Texas? 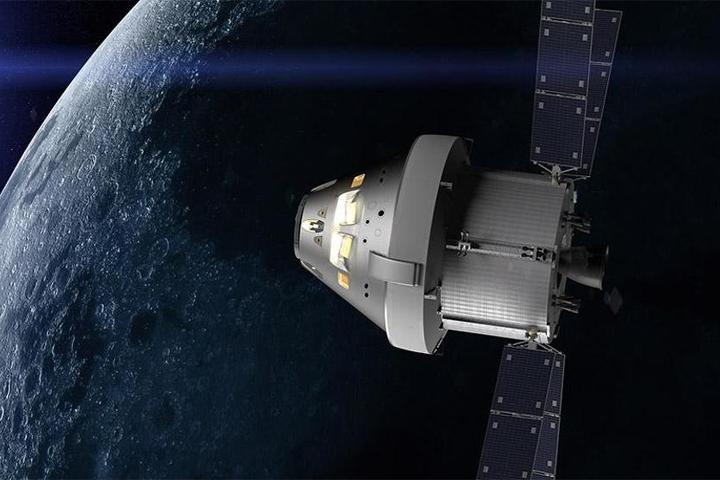