WARSAW – In July, Donald Tusk, the former European Council president who previously served as Poland’s prime minister from 2007 to 2014, returned to Polish politics Many voters remember him as the politician who raised the country’s retirement age – a policy that was reversed in 2017 by the Law and Justice Party (PiS). In fact, the PiS has blamed Tusk for pretty much everything that is wrong in Poland.

Other paranoid accusations leveled against Tusk include that he collaborated with Russian President Vladimir Putin in 2010 to arrange the plane crash that killed President Lech Kaczyński, the identical twin brother of PiS leader Jarosław Kaczyński, and that he is, in fact, a German backed by Chancellor Angela Merkel.

But Tusk is a consummate pragmatist. He admits that he made some serious mistakes during his tenure as prime minister. He now believes that people should be able to choose whether they want to retire earlier or get a larger pension for retiring later. He is less economically liberal than he was before, conceding that the state should be more active in redistribution. Like the rest of the Polish political class, he acknowledges that the PiS government’s many generous social programs are popular. There will be no returning to the neoliberalism that dominated Poland after 1989, in the era of then-Finance Minister Leszek Balcerowicz’s “shock therapy.”

Tusk’s return has had an electrifying effect. His party, Civic Platform, immediately regained the lead among the opposition, with its support rising from 16.9 to 27.3 in the space of a month. Moreover, an analysis of the polls shows that he has won over as many as one million new voters for the opposition. As one commentator put it, Tusk has rolled in like a tank to challenge the infantrymen of PiS and the other opposition parties.

The atmosphere within Civic Platform has also changed. The party’s previously comatose politicians have woken up. Tusk is traveling the country and meeting activists, local government officials, and ordinary people. At press conferences, he answers even hostile questions, including from PiS-aligned media outlets. Not allowing himself to be provoked, he both admits to past mistakes and offers sharp ripostes – a style that contrasts starkly with Kaczyński, who never takes questions at press conferences.

Tusk’s strategy is to serve as a kind of father of the opposition. He not only avoids disputes, but also praises other opposition leaders effusively. He is not the kind of politician who wants to share power; but, for now, he is focused on defeating PiS. That goal comes with significant career risks. Although Kaczyński has a significant resource advantage (presiding over the state budget, public media, state-owned companies, and European funds), losing to him nonetheless would be a grave embarrassment for Tusk.

Tusk’s return has also intensified Kaczynski’s war on Poland’s independent media. To limit the opposition’s electoral prospects, PiS has tried to pull the plug on the country’s largest private television station, TVN, and its news channel, TVN24. Because the station is owned by the US company Discovery (which is in the process of merging with another American firm, WarnerMedia, the parent company to CNN), PiS has introduced a law that would bar entities from outside the European Economic Area from controlling television entities operating on the basis of a license issued in Poland.

PiS pretends that it wants to protect Poland’s media market from takeovers by other countries, such as Russia, China, or an Arab state. But, giving lie to this claim, the PiS-controlled National Broadcasting Council has been delaying the extension of TVN24’s broadcasting license for 18 months, simply out of spite. The station now has fewer than 50 days left to secure a renewal.

Poland is thus spurning the country on which it most depends to maintain its own national security. The United States has repeatedly signaled its opposition to PiS’s actions, with a bipartisan group of US senators warning in a recent joint letter that:

“These and other steps, which Poland – a NATO ally and close friend and partner of the United States – has recently taken, do not reflect the shared values that underpin our bilateral relationship. Any decision to implement these laws could have negative implications for defense, business, and trade relations. We urge the Polish government to pause before acting on any measure that would impact our longstanding relationship.”

The message here is clear. If the law is enacted, Poland can forget about any large weapons contracts, an increased American military presence (beyond the 5,000 US soldiers who currently rotate through the country), or any state visits. Of course, that last point may well suit Kaczyński, who bet everything on Donald Trump remaining in power and now sees no reason to cooperate with US President Joe Biden’s administration.

Still, there is opposition to the so-called “Lex TVN” even within the ruling camp, where a small group of deputies led by the conservative member of parliament Jarosław Gowin has pulled out of the PiS coalition government, opening the possibility of it falling soon.

Kaczyński appears willing to sacrifice the Polish-American alliance in an attempt to obliterate the opposition’s electoral chances. He is even more desperate now that the country’s COVID-19 vaccination campaign has stalled, setting the stage for a fourth pandemic wave and possibly another lockdown. Worse, anti-vaccination sentiment is rising within the right-wing electorate, including among PiS voters. That means the government cannot risk using coercion or discrimination against the unvaccinated to head off more infections.

On top of everything else, Poland is still in a dispute with the European Union over the independence of the judiciary, leaving it vulnerable to having its EU funding cut off. Lacking a stable parliamentary majority and facing the possibility of a fourth wave, PiS thus finds itself on a collision course with not only its own electorate, but also with the EU and the US.

Still, Tusk must pierce the ceiling of 25-30% support to overtake PiS in the polls. The coming months will show us how strong he is, and how weak Kaczyński may have become.

Sławomir Sierakowski,   founder of the Krytyka Polityczna movement, is Director of the Institute for Advanced Study in Warsaw and Senior Fellow at the German Council on Foreign Relations. 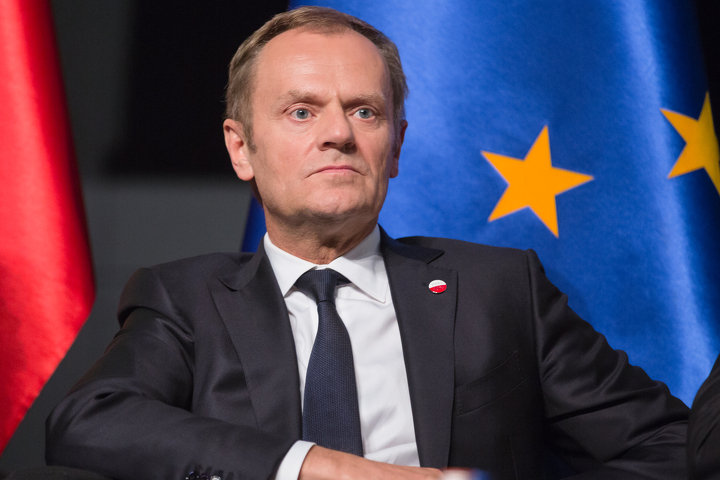