General Motors is shifting into overdrive on electric vehicles to carve out a bigger share of that market, with plans for dozens of new models, redeployment of engineers to a dedicated electric vehicle division and committing $27 billion for battery and autonomous technology development to overtake Elon Musk’s Tesla Tesla wasn’t mentioned in a presentation by CEO and Chairman Mary Barra to Barclays Global Automotive conference, but the Detroit-based company’s aggressive strategic shift includes becoming the North American market share leader in the technology over the next few years. It’s budgeting an additional $7 billion between now and 2025 to help do that.

“We believe developing EVs is core to growing our business and creating value for shareholders,” Barra said. “We’re committed to fighting for EV market share until we are number one in North America.”

The biggest U.S. automaker plans to release 30 battery-powered models globally by 2025, two-thirds of which will be available to North American customers from its Cadillac, GMC, Chevrolet and Buick brands. The first new model to get GM’s lower-cost Ultium battery pack is the GMC Hummer EV due in late 2021 followed by the Cadillac LYRIQ crossover that arrives in early 2022. GM’s investment is also going to beef up battery production and overhaul existing facilities to shift to making battery-powered cars and trucks, while better utilizing its large global network of R&D labs and testing facilities for this new generation of vehicles.

GM was a pioneer in battery-powered cars, releasing the EV1 subcompact in California 24 years ago as an early test vehicle, its abandonment of the technology created an opportunity for Musk and Tesla in the early 2000s. In the past decade, the company has steadily grown its presence in the electric market, starting with Volt plug-in hybrid and Bolt EV, but kept its focus on money making carbon-fueled trucks and SUVs. Lower costs for batteries and components, tougher global rules to limit CO2 emissions and the incoming Biden Administration that’s prioritizing electric transportation underpins the company’s new strategy.

“Our work to accelerate our EV and technology leadership is a significant undertaking, but we know we control everything it takes to lead and to win,” Barra said. “We will invest an additional $7 billion in EVs through 2025. bringing our total investment in EV and (autonomous vehicles) to over $27 billion.”

Tesla’s steady sales and production growth and its recent run of five profitable quarters, the longest such stretch in company history, along with Musk’s uncommonly loyal fanbase, have made it the world’s most valuable automaker with a market capitalization of $473 billion. And while its addition to the S&P 500 index fueled a 22% jump in the stock so far this week, Tesla’s production capacity and earnings are a fraction of GM’s. Musk is racing to open new factories in Germany and Texas, in addition to its main California plant and new Shanghai Gigafactory, though it will be several years before it can match the scale of GM’s global production operations.

William Li has rejoined the ranks of the world’s billionaires as shares of ... →

Along with electric Hummer and Cadillac models, the company is readying three other GMC models using the Ultium system, including an electric pickup, and four Chevrolet brand EVs, including a pickup and small crossover. Earlier this month, GM said it would hire 3,000 new tech workers before the end of 2021’s first quarter to help with the accelerated EV push.

Separately, Barra declined to comment on GM’s potential partnership with hydrogen truckmaker Nikola Inc. With regard to other partnerships, “we don’t have anything specific to announce,” she told Barclays equity analyst Brian Johnson.

GM says it will be able to sell electric vehicles with range of up to 400 miles per charge at a profit, owing to costs for its Ultium batteries that are about 40% below those currently used in its Bolt EV. A next-generation Ultium that arrives in a few years will be 60% cheaper than Bolt batteries and may offer a range of up to 450 miles per charge, said  Doug Parks, GM’s executive vice president for product development, purchasing and supply chain. Additional cost savings will come from commonizing more parts across all of GM’s product lines.

“GM’s EV development times are speeding up and costs are going down rapidly, so we expect our Ultium EV programs to be profitable from the first generation on,” Parks said. 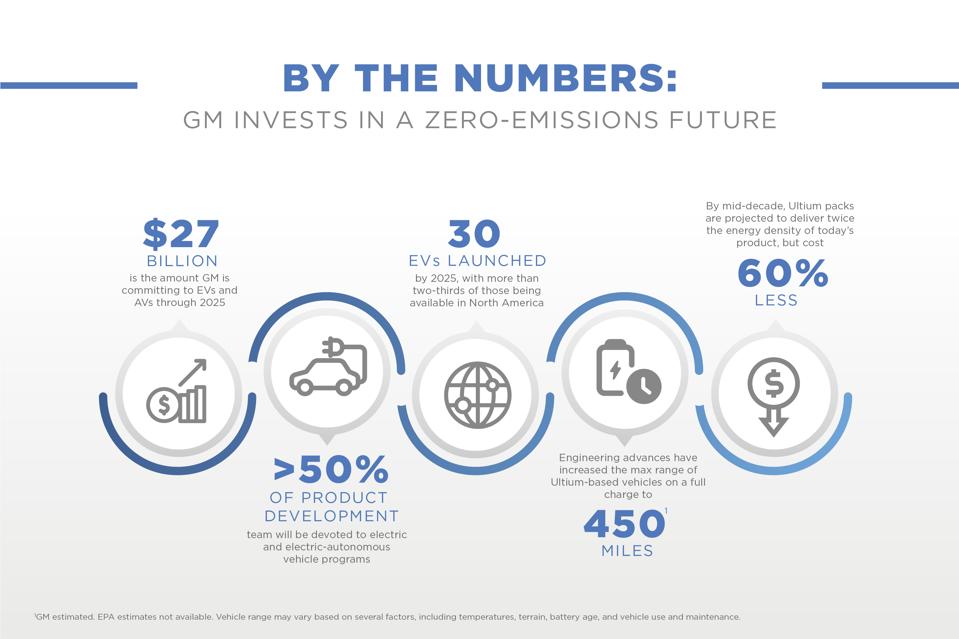